Windmills planned for the West Coast 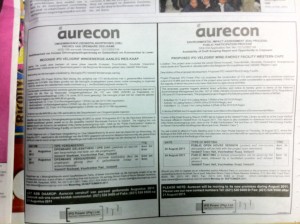 New regulations for wind power projects.
The Department of Energy announced last week that 1850 mw wind power by 2016 will be raised.

This is a significant larger quota than 700mw by 2013 the Integrated Resource Plan (IRP2010) prescribed, but still less than the 4 000mw represented by projects already in June this year by the Department of Environmental Affairs approved.

The government has deviated from the favorable fixed guaranteed incentives (Refit) in 2009 and announced was a stampede of developers of renewable energy projects in the country led. Developers must now send department suggestions for projects and compete with each other that regards price and a number of social-economic criteria (Source: Citizen, August 5, 2011).
Anton Bredell, the provincial minister of local government, environmental affairs and development planning also announced tighter measures renewable energy projects to regulate. This includes in maximum height (200m) for the wind turbines, a back away of 1.5 times the overall height of the blade measured from the nearest residential agricultural or commercial structures maintained has been submitting a site development plan by the municipality and developers through a fund from the municipality must provide for rehabilitation or management negative environmental impacts the project would be dismissed. (Source: Provincial Gazette 6894).
South Africa is 12th in the world rankings of the largest breeding house gas producers and is the largest inAfrica. (Source: www.guardian.co.uk) The government is there to take immediate steps to generate the effect on an environmentally friendly way to. The West Coast by the Department of environmental issues considered an area highly suitable to build wind farms. (Source: website of the Southern Africa Alternative Energy Association (SAAEA), May 2011).WestCoast district Municipalities market the field as such on their website.

Two wind power projects in the Saldanha Bay area has environmental approval by one West Coast Energy Moyeng near Paternoster (55 wind turbines on 80m high) and a wind farm by Umoya Energy 4 miles southeast of Hopefield (50 wind turbines).
According to Keith Harrison, local representative of Birdlife SA, there are at least seven wind projects in the immediate vicinity of Vredenburg awaiting environment approval.

Some residents are doing Paternoster Moyeng wind project and to the department applied the period extended against the project appeal. It rages threatened with legal action would not be allowed. They counter that the proposed wind farms surround the village and therefore tourism, one of the town’s main sources of income when will blow.