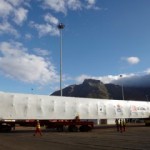 The mould, which arrived by ship from China, will be used to manufacture 50-m long rotor blades – exceeding the span of an Airbus wing.

At 2.5-MW, I-WEC’s turbines would be nearly double the size and capacity of the 1.3-MW turbines currently in use in South Africa. About 70% of the turbines’ components will be manufactured locally.

I-WEC said production of its first turbine would start immediately in order to erect the final product in Saldanha in early 2012.

A welcomed project for South Africa’s embattled manufacturing sector, the R100-million investment would create between 70 and 100 direct jobs in the Western Cape, in the next two years.

At project peak, and depending on market conditions, about 400 direct jobs could be created in the next five years.

I-WEC spokesperson and financial manager Thomas Schaal said the investment enabled the company to significantly contribute to the local economy, through the establishment of a local turbine manufacturing facility.

“The company will deliver on creating sustainable jobs and skills development contributing to the growth and development of the renewable energy sector in South Africa and Africa,” said Schaal.

Since its inception in 2009, I-WEC has created 30 direct jobs comprising 15 jobs for previously disadvantaged technicians, who have received specialised training in rotor blade manufacture.

It has 15 employees at its Table Bay Harbour office, including engineers and administrative staff.