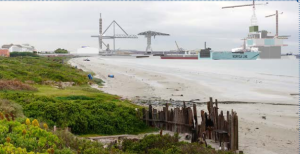 In South Africa, an application is set to be submitted to the Western Cape Cabinet at the end of this year, to transform the Saldanha Bay Industrial Development Zone (SBIDZ) into an independent public entity. The SBIDZ has designed a port that provides players in the oil and gas industry with a customs-controlled and duty-free area.

Once the application has been submitted, Economic Opportunities MEC Alan Winde, who is driving the application process, said last week: “We will then go ahead with the legislation to formally set up Saldanha Bay IDZ as a state-owned enterprise.”

The IDZ
The IDZ was officially launched by President Jacob Zuma in 2013 where he handed over the Industrial Development Zone Operator Permit to Wesgro, the official Destination Marketing, Investment and Trade Promotion Agency for the Western Cape.

IDZ ownership
The Business Report reported that Provincial Legislatures (MPLs) opposing this transition, were sceptical of the timing of the move, to which Winde said that the IDZ had already started operating independently in April 2015.

Winde added that despite Wesgro being the 100% shareholder, LiCo transferred control in February, due to the resignation of two Wesgro directors who were replaced with six newly appointed representatives.

Winde added that the initiative, which will provide investors in the oil and gas industry, with a free port, is driven by national, provincial and local government, the Business Report reported.

He added: “There are more than 40 companies that want to get on board.”

Investing in the IDZ
According to Winde, Wesgro will continue to drive investment into the IDZ: “At the moment, the licensing company is spending money that comes from DTI [Department of Trade and Industry], putting the infrastructure in place.

With efforts to get the application approved, Winde commented: “It has not gone to cabinet yet, but we are trying hard through the legal services, through interaction with our partners being DTI, IDZ, Transnet, the local authority and the licensing company to agree on the legislation.”