Wave Power could be an option for the West Coast, Darling to Saldanha 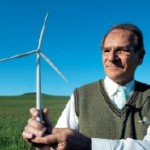 SA’s abundant sea waves have the potential to provide more than just a good surf. Wave energy — electricity generated from the movement of waves — could provide a cheap and sustainable form of renewable energy. But it’s early days.

Oelsner Group, which built SA’s first wind farm at Darling, is planning a 750MW wave energy project off the West Coast, near its Darling Wind Farm. The design is modelled on the University of Stellenbosch’s Wave Energy Converter (Swec) but the hurdles yet to be overcome include an environmental impact assessment, determining which authorities are responsible , and securing funding of R100m for a demo plant and R15bn in total.

The project would be made up of 150 units of 5MW each, all 1,5km away from the coast. These will stretch 40km from Darling to Saldanha and the power will be transported to land via a sea cable.

CEO Hermann Oelsner says there is potential to use offshore wind in conjunction with wave technology.

The main problem, however, is wave energy’s lack of support in energy policy. It is not mentioned in SA’s integrated resource plan, despite Oelsner’s efforts.

Prof Wikus van Niekerk, director at Stellenbosch University’s centre for renewable and sustainable energy studies, says research on the modelling and turbine design of the Swec continues, but it may still be far from commercial operation. One reason is the high cost of the technology. But the centre has introduced a new patent — the Shoreswec — which can be built into harbour walls to generate power. The centre has approached Growthpoint (owners of Cape Town’s V&A Waterfront) to install the Shoreswec into the harbour wall if a new marina is built.

“We are aware of the need for renewable energy,” says Growthpoint CEO Norbert Sasse . “We will consider it provided it is economically feasible and gives us a return.”