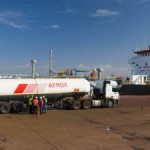 Cape Town – There is an end in sight to the liquefied petroleum gas (LPG) shortage in the Western Cape as 4 500 tons will dock in Saldanha Bay next week, MPs heard on Wednesday.

The managing director of Kayagas, George Tatham, told Parliament’s select committee on economic development that almost the whole consignment due on November 9 had already been sold, including to the company’s competitors.

“We hope by Friday it will all have been sold,” Tatham added after the briefing.

“It resolves the situation, at least in the Western Cape. It will carry us until the end of November, to the critical point when the refineries are going to be up,” he added.

The country is in the midst of an LPG shortage, caused by the simultaneous closure of three refineries.

PetroSA and SAPREF are in the midst of unplanned shutdowns while ENREF has been forced by a fire to bring forward a scheduled closure for maintenance.

“It is a big plus. It will take the Western Cape out of the equation on shortages at least,” said deputy director general for hydrocarbons and energy planning, Tseliso Maqubela.

The department told the committee at the moment importing more LPG was the only answer to the chronic shortages seen this very winter, as local refineries lacked the capacity to meet growing demand.

“In the short term we need to be looking at unlocking some facility for importing,” Maqubela said.

“Existing infrastructure cannot meet the demand. What we are seeing is that the refineries are inundated.

“There is a need for import infrastructure and therefore port authorities are going to need to come to the LPG party. Port authorities generally are risk averse, particularly when it comes to LPG facilities.”

Tatham underscored this, saying bringing gas through Saldanha had become possible purely because of a high level change of staff at port authority headquarters in Durban.

“The new port captain is much more progressive. He has put up an import facility there,” he said.

This would enable a constant flow of 4 000-ton shipments through the West Coast port next winter.

This adds a fourth point of entry to the existing but inadequate facilities at Durban, Port Elizabeth and Richards Bay.

“Ultimately imports are going to have to cover demand.”

The department told MPs that it firmly believed that there was a need and possibility to increase refinery capacity but that this was hampered by, among other things, doubt being cast on its pronouncements.

“There is a lot of second-guessing of policy pronouncements and it’s not helping the economy. It leads to a lot of delays in decision-making.”

The automobile industry said unpredictable shortages in the Eastern Cape had caused severe disruptions in the production of catalytic converters, and was threatening investment.

“Multi-national companies ask how they can invest when there is no security of supply and say they would rather go to other countries, for instance China, where there is no such as threat,” said General Motors’ Shibishi Maruatona, representing the National Association of Automobile Manufacturers of South Africa.

Maruatona asked that competition rules be relaxed to allow LPG to share more information to take some of the surprise element out of shortages.

The deputy commissioner of the Competition Commission, Tembinkosi Bonakele, said the industry had been given certain exemptions until 2015 but this had not always provided the expected relief.