I-WEC to start manufacturing. Facility to relocate to West Coast in 2012 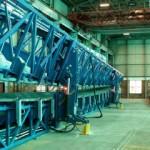 At this stage, I-WEC had a single mould to produce rotor blades for 2.5 MW wind turbines. Schaal told Engineering News Online that the mould should be able to produce about 50 sets of rotor blades a year when full production capacity was reached in 2013.

The first blade would take about one month to produce and would be used as a test blade. During this period, a number of equipment and material suppliers would be present to give input in the process, I-WEC facilities and planning engineer Simon Graaffsaid.

The first blade would be tested to confirm that I-WEC’s processes were robust and able to produce rotor blades with the ability to withstand the strain they would experience when in use. After the first test blade, Graaff estimated that a single blade would take about two weeks to manufacture from start to finish.

“Aerodyne is one of the leading companies in the wind energy market worldwide with a share in the biggest market, China, of more that 65% and more that 13 000 turbines running worldwide based on their design,” said I-WEC MD Dr Michael Kast.

DCD-Dorbyl, an investor in I-WEC, would be a close partner in the manufacture and assembly of the remainder of the components for the wind turbines.

Schaal said companies in the DCD-Dorbyl group would manufacture the turbine tower, the flanges to bolt the forward tower segments together and would assist in the assembly of the turbine nacelle. DCD-Dorbyl group companies would also be involved in transport and erection of the completed turbines. The entire process would, however, be under the umbrella of I-WEC, which would act as project managers. “With DCD-Dorbyl, our shareholder . . . we certainly have a perfect fit,” Schaal said.

Initially, the local content of I-WEC wind turbines would be about 60% as components such as the gearbox and castings would need to be imported until there was sufficient capacity in South Africa to produce these. However, Schaal anticipated that ultimately the local content would rise to 85%.

The cost of a turbine produced at the I-WEC facility, including transport, foundation costs and erection on site, was in the order of R15-million to R17-million per megawatt.

Currently, the company had an order of six wind turbines for ArcelorMittal’s Saldanha steel plant, where the first complete I-WEC wind turbine would be installed in March. I-WEC would also be involved in management of the Saldanha wind farm.

Schaal also stressed that job creation and skills development were key features of I-WEC’s philosophy. The company employs about 30 people, but it would be recruiting another 75 to 100 staff members in the next two years. If it achieves its aim of producing 200 wind turbines a year, I-WEC would create a total of 400 direct jobs, something it hoped would happen in a four- to five-year timeframe.

Graaff said that I-WEC would likely be moving its blade production facility from the Cape Town harbour to Saldanha at the end of 2012, or the beginning of 2013, where the production capacity could potentially be increased.

A property in Saldanha had already been procured and I-WEC’s existing staff training facility was already situated in the neighbouring town of Vredenburg in anticipation of this move.

Are you spending a small fortune on your office printer ink? We can help, Call Charlene 0227131111 or ink@pencil.co.za