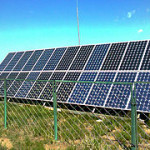 The Saldanha Bay Municipality has confirmed that it has received applications for land use changes for four solar panel electricity farms.

One application is the controversial proposal by Soventix for land off the R27 at the entrance to the town. We reported last month that the Government has rejected an appeal by the Langebaan Residents’ and Ratepayers’ Association (LRRA) to refuse environmental approval for that farm on the basis that it would be unsightly there.

The LRRA says it has urged the developers and the owners of the land they plan to lease, ArcelorMittal, to put the farm out of the way near the steelworks. It says it supports green energy but a solar panel farm at the front door would not be a good advertisement for the town.

Soventix, which advertises on its website that can turn almost any unused land, or even factories with large roofs, into income-producing electricity generators, told Langebaan Online it was planning four farms in the town.

Gary Tomlinson, head of town planning, told Langebaan Online the Soventix application was one of four received by the municipal Department of Spatial Planning and Development. The others were on farms referred to as Storm, Mystic and Dunes in the Vredenburg area.

“All four land use applications are still being processed and no evaluation of desirability has taken place – this will occur only once all the necessary  information, comments/objections and ancillary detail have been obtained  and reviewed. As yet there are thus no recommendations which have been decided on or formulated.

“Visual impact assessments form part of the environmental applications for all of the proposals but are still to be provided for the land use applications; no evaluation will take place without that information to consider.

“To our knowledge there are some proposals currently undergoing environmental evaluation for which no land use applications have been lodged as yet. We have requested the Department of Environmental Affairs and Development Planning to confirm how many such applications they are processing and will inform you accordingly,” Tomlinson said.