Rendezvous and your host Johan invite you to enjoy your stay at this Porterville accommodation. All their rooms are very spacious and with bathrooms en-suite.

Why not enjoy sitting in the lounge with a good book, have a drink or meal in their lovely restaurant or bar and just relax or watch the current sports channel. Or alternately, you can enjoy sitting in the garden whilst enjoying the spectacular mountain views. The restaurant is fully functional for intimate functions, weddings, and conferences with a capacity for sixty people.

Property Facilities:
The great facilities, good food and friendly staff is what you can expect at Rendezvous in Porterville. The town is a peaceful place with many nearby attractions such as waterfalls and is perfect for a stopover when exploring this area of the Western Cape.
Area Information:
Porterville is a town in the Western Cape province in South Africa.

Town at the foot of the Olifants River Mountains, 27 km south-east of Piketberg and 155 km north-east of Cape Town. It was laid out in 1863 on the farm Pomona, previously Willems Vallei, and became a municipality in 1903. It is situated 140 km north of Cape Town on R44 road at the base of the Olifants River mountains. Agriculture in the area is dominated by wheat production.

The town was established in 1863 and named after William Porter, Attorney General of the Cape Colony from 1839 to 1866.

In Room Facilities:
There are seven rooms to enjoy and they are all en suite at this accommodation Porterville offers. The rooms are decorated beautifully and the natural tones add to the tranquility and relaxation you will experience.
They also offer a laundry service, disabled facilities, air conditioning, television, Internet and secure parking.
Attractions:
They invite you to leave the city for a weekend and come and experience a stay in Porterville. You will definitely want to stay longer in this peaceful place, so pack your bags and head to Rendezvous for a memorable holiday experience. 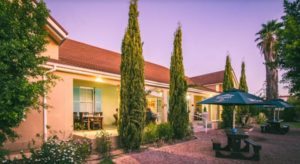