Mykonos casino is to get a R30 million make-over in the next year. 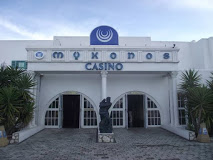 Mykonos casino is to get a R30 million make-over in the next year.

The casino’s 30% owner, Trematon Investments Limited, says in its half-year report to shareholders that the casino will be refurbished and improved.

“The casino is a stable and reliable generator of income but has the potential for significant further growth as a result of the increase in popularity of the resort and the Langebaan area as a tourist destination,” the company says.

“The promulgation of the Saldanha Bay IDZ is also expected to catalyse economic growth in the area of which there are already concrete examples.”

Commercial property to let on the West Coast.

Trematon is the sole owner of resort development company Club Mykonos Langebaan, which it values at R300 million. The company owns “large tracts of zoned serviced land within the resort as well as other commercial and rental assets. The resort has undergone some significant improvements over the past few years.”

Rental income increased by 24% in the six months to February and sales increased by 26%. “Occupancy levels and the number of repeat visitors continue to be very pleasing. Detailed plans for new development are in the last stages of development and announcements can be expected shortly.

Club Mykonos profit was up 14%.

The casino is managed by Tsogo Sun, its majority owner.

“The expenditure will be mainly to do with design and aesthetics, such as new flooring, chairs, machines etc, and some changes to the layout of the entrance area to make it more appealing and customer friendly. The washrooms will also be refurbished,” Shapiro said.

Commercial and business premises to rent on the West Coast.