Saint Helena Bay (Afrikaans: St. Helenabaai) in the West Coast, nicknamed by locals as Agterbaai, is located on the shore of the bay and from which it derives its name. St Helena Bay is approximately 150km north of Cape Town, South Africa.

It is known as a major fishing town and home to Sandy Point Harbor. In winter it is host to many fishing activities, where snoek is found in its waters, as well as an endangered species of rock lobster and crayfish.

Historically, Saint Helena Bay is the location where Vasco da Gama, first set foot in SA.
The date of this event was recorded as November 7, 1497. On the actual site of Vasco da Gama’s arrival is a monument. Other attractions include dolphin and whalewacthing, as well as sightseeing.

St Helena Bay is the only area along the South African West Coast where the sun rises across the bay. Reason for this is its unique location, where by the town itself faces north east and almost north. It is described as “calm and tranquil” as quoted from the Portuguese explorer, Vasco da Gama.

To the west of St Helena Bay, is a secure golfing estate known as Shelley Point. 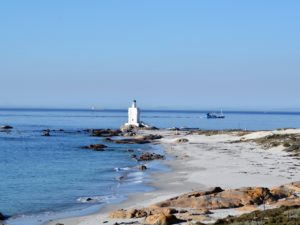